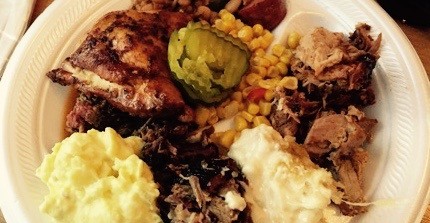 Last year my friend’s dad died.  I loved her father, how could you not?  He was Lebanese with a southern accent and referred to me as his Yankee daughter.  Over the last 30 years we’d met at weddings and funerals and trips to Texas always included a visit to his home.

When he passed, I didn’t to rush to visit; instead I waited for a sadness to befall my friend that she wouldn’t understand while in the midst of shock, family and baklava.  At some point however, on a particularly cold day, I decided to go to Texas; strut around in my kick-ass boots and pay my respects to the family.

Scheduling my trip over the widely celebrated rodeo weekend, I set out on my adventure.

From BBQ’d pig and cow, to the truffle mac and cheese; I filled my plate time after time only stopping to wash the yummies down with vast amounts of vodka.  I had on spandex pants and a need to feed, nothing would stop me!

Hours later, I stumbled home and settled into bed only to awaken by what can best be described as meat sweats.  Bloated and disoriented, I lumbered to the potty.  Gently lifting the blinds for signs of sunlight, I saw what would send me into my friend’s bedroom with a determination best reserved for a flood or fire.

Dragging Kathy back to the toilette, I lifted the blinds and showed her the gift from her dad.

Now, it’s at this point, I feel somewhat obligated to share my philosophy on death; I believe that while people may leave their earthly state, their spirit remains with us.  Flickering lights, ringing chimes, birds and/or butterflies, I’ll leave it to you to decide if/what you believe.

In this case, Mr. W decided to gift me with something he knew I would see and share.  His gift wasn’t a subtle summer breeze but instead a swinging 2×4 to my already booze-addled brain.  You see, as I lifted the blind I was offered a view of a beautiful cross.  What made the cross most significant, was not simply it’s unexplained presence, but it’s resemblance to the cross that’s hung from my friend’s neck almost as long as I’ve known her.

Mildly impressed with my discovery, Kathy shuffled back to bed.

I flew home the following day.

Weeks later, I called to honor the anniversary of Mr. W’s death and was greeted by an excited Kathy; unbeknownst to me, she’d been checking on her dad’s cross daily and that week, the cross appeared with a tiny subscript side kick.

Thrilled that Kathy’d found comfort and even JOY in the most recent iteration of her dad’s gift, I shared the happy-ending story with a friend.  While looking at the photos, her daughter, completely unencumbered with the vast rules assigned to death and dying said, “look, there is a heart in the center of the cross”.

And sure enough there it was, at the heart of the gift, a heart.

What do you see?

Proust is noted as saying some version of the following — “the real voyage of discovery consists, not in seeking new landscapes, but in having new eyes”.   Believe in Kathy’s gift or not, I challenge you to look at life through new eyes; you never know what you might discover!

I hope this post finds you well AND yes I am thrilled to be back.